An overview of the HARP database 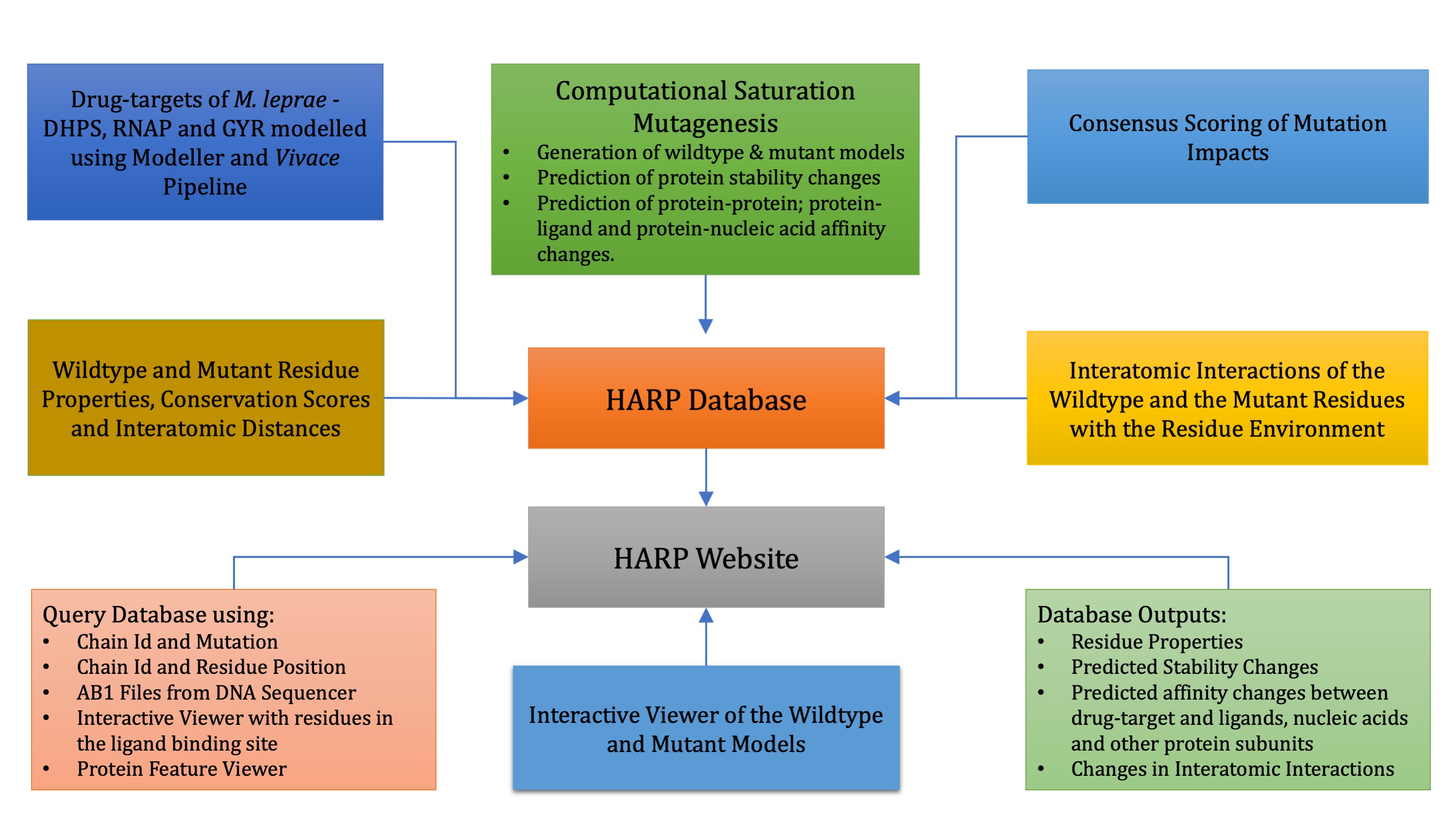 Multidrug therapy for leprosy has three individual drug components, each of which has either bacteriostatic, bactericidal or anti-inflammatory activity. The bacteriostatic drug, dapsone, interacts with Dihydroptheroate Synthase (DHPS) which is an essential enzyme in Mycobacterium leprae to synthesize folic acid. Mis-sense mutations within the dapsone binding region of the DHPS are known to confer dapsone resistance in leprosy. The bactericidal drug, rifampicin, interacts with RNA-polymerase (RNAP), an enzyme essential for DNA-dependent RNA polymerization or transcription in Mycobacterium leprae. Mutations within the binding site for rifampicin in the active centre cleft of RNAP complex, confer resistance to rifampicin in leprosy. The bactericidal and anti-inflammatory drug, clofazimine, has no determined drug target in Mycobacterium leprae and clofazimine resistance in leprosy is rare. Hence, this drug was not included in the database. A second line bactericidal drug, Ofloxacin, interacts with DNA Gyrase (GYR) and mutations in the drug-binding site confer ofloxacin resistance in leprosy.

In the absence of faster experimental methods to associate mutations with resistance phenotypes in leprosy, the decision to choose alternative therapies for drug-resistant cases relies on the identification of mutations that have prior experimental validation in mouse footpad models. There is no structural information available to-date on newly emerging mutations. A suite of software tools was developed in Blundell's laboratory at the Department of Biochemistry - the University of Cambridge, over the last three decades, to predict the impacts of mutations using information related to sequence and structure of the drug-target proteins. In HARP, we performed systematic mutagenesis (mutating every amino acid to all other 19 possibilities) for all the three drug-targets (DHPS, RNAP & GYR) and computed structural impacts of mutations on protein stability, subunit interactions, and protein-ligand and protein-nucleic acid affinities. HARP is designed for research purposes. The name HARP (a database of Hansen's Disease Antimicrobial Resistance Profiles) is given in respect of Prof. Sir Tom Blundell's early career and interest in music and to align HARP with other tools and databases that are either named after musicians (Chopin, Mabellini ) or musical terms (Tible, Arpeggio). We thank the Structural Biology and Biocomputing Group for their contributions to this resource. A special thanks to American Leprosy Missions for funding this initiative.

HARP is a Leprosy Resource